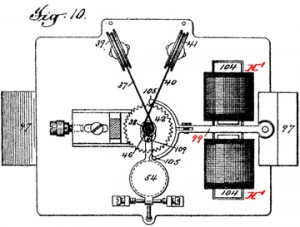 Wha is a Teleautograph and how does it work?

Teleautograph is an analogue precursor to modern fax machines. Before its development, the facsimile machines used , but the main difference telautograph brought is the fact that the sheet of paper is stationary, while the stylus is the mobile part, and that the transfer of data is simultaneous, conducted without material loss of original characteristics.

Teleautograph's invention is attributed to Elisha Gray, an American inventor most popular by his development of telephony, as his work set the basis for Alexander Graham Bell. But his facsimile development is just as important. The company he founded, Teleautograph Corporation, was operational until 1993 when Xerox bought them.

The impact this device had on the overall development of communicational industry can not be understated, but it is very rarely found in the history books. Elisha Gray's plans and blueprints for development of his facsimile device have found their way in many of the early Xerox products, which is what made the company a global powerhouse it is today.