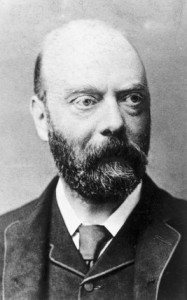 British physicist and inventor are one of the people who had a very substantial impact on the development of technologies that will later become what we use today as a fax machine. His most famous work is in the field of telephotography, a method of converting an image into a signal that can be transmitted and received.

Shelford Bidwell (6 March 1848 – 18 December 1909), born in Thetford, Norfolk, oldest son of a brewer and a housewife. He attended Cambridge and got praised for his scientific work. By the end of his life, he was a wealthy man, leading a household with five servants, a wife from the good family and working on various research projects in the field of electronics.

Only the research relating to the facsimile will be covered here – Shelford Bidwell was working on many other projects.

In the late 1870's Shelford Bidwell conducted a series of experiments based on the search of Alexander Graham Bell. The experiments were related to “photophone” concept, and methods of improving it, so it is applicable in contemporary communication and transmission of data. He focused on two separate aspects – of converting an image to electrical signal using a rotating cylinder covered with a potassium iodide treated paper, and the second part was transmitting the said signal to the receiver with reliability.

He did a study on the amount of data that needed to be transmitted so the picture could be transferred from one place to another, and has concluded that the “distant electric vision” as he called it is still unviable due to sheer volume of circuits needed to transfer the elements of each image (pixels).

His research was used as a basis for further development of facsimile machines.