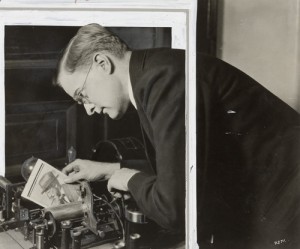 Richard H Ranger is an American inventor who has made his imprint in facsimile machines history by being the first one to successfully transmit a photo wirelessly in a transoceanic message.

Born in Indiana in 1889, he was interested in electrical engineering and music engineering. Served as Major during the World War I. His photoradiogram machine is a direct precursor to modern fax machines, and in 1924, his invention sucessfully sent a first transoceanic message from New York to London. His design saw commercial use after only two years.

His other notable contributions include analyzing German communication and encryption methods after World War 2 and setting the stage for the development of modern magnetic tape recorders. His work has earned him a place in new Jersey Inventors Hall of Fame in 1997 – a posthumous acknowledgement, as Richard has lived till 1962.