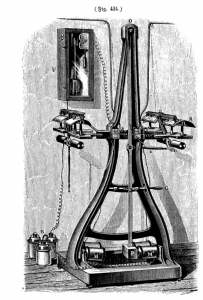 There were multiple attempts to make machines that can transfer photos and handwriting over long distances, but they were too complicated, too expensive and too unreliable to use. Pantelegraph is one of the best facsimile machines, used commercially in the later part of the 19th century. There were multiple locations with permanent pantelegraph connection, Paris and Marseille being the first major one, with Saint Petersburg and Moscow being the one that put the need for a commercial solution for the transfer of data in the spotlight.

Inventor of Pantelegraph is Italian physicist Giovanni Caselli, and his invention was used mainly by banks and similar establishments to sign legally binding documents over long distances.

This device would transmit a sheet of paper worth of text for about 110 seconds, using a pendulum and a regulating clock to create electromagnetic impulses which would be transferred over long distances and leaving a paper impression on the receiving end using a sheet of tin foil and conducting ink.