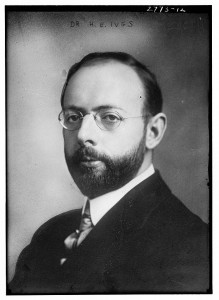 Herbert Ives (21 July 1882 – 13 November 1953) was a scientist and an engineer best known for his work with development on facsimile and TV systems in AT&T, as well as with his theoretical work in denying special relativity. He conducted a large-scale experiment that confirmed the theory he was against, even with him offering alternative methods of data interpretation.

Born in Philadelphia and educated in Pennsylvania, his main point of interest was aerial photography. He was also a coin collector, later to become a president of American Numismatic Society, but it is his love for photography that got him a job in the R&D department of AT&T, a growing communication company at the time.

His standard research was more closely related to theoretical physics than practical facsimile machines, but he still left his imprint with his works. In 1924 he managed to transmit the very first color facsimile, using the basic methods of color separations, methods that are still used by modern printers. He was also able to transmit more detailed television over long distances live, and has managed to develop a two-way TV system, the precursor to today's video chat capabilities (expensive and unpractical at the time).