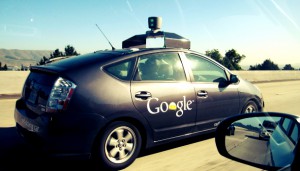 New data now shows that Google’s self-driving cars such as their Lexus and Prius models are safer and more reliable drivers than humans themselves. According to the leader of Google’s car project, the data reveals that the Google cars are smoother and safer when steering themselves in comparison to a human driver. Results from two studies of data based on thousands of miles that were logged from the Google vehicles were presented at a recent robotics conference in Santa Clara, California. The vehicles themselves have been logging miles throughout public roads in Nevada and California.

One of the studies showed that when a human was driving, the Google self-driving cars braked and accelerated more sharply than they did when they were steering themselves. Another portion of data revealed that the cars’ software was better at maintaining a safe distance from vehicles ahead than human drivers were. These factors combine to produce less time that is spent in near-collision states when driving on the road. Furthermore, it was also revealed that Google had hired professional drivers to base their comparisons on, further illustrating the fact that their cars were able to drive more smoothly and reliably than a trained driver.

During the conference, project leader Chris Urmson led the attendees through a brief presentation of a new dashboard display that Google has developed to help individuals understand the role of the autonomous car, as well as situations where they might want to handle the various responsibilities of driving. He explained that Google has been focusing on different ways that they can make the human element of driving work well with the rest of the experience of owning an autonomous car.

Although the development self-driving cars are undergoing at the moment might suggest to people that Google is getting ready to introduce the car to motorists, Urmson seemed to avoid the question and indicate otherwise, claiming that he couldn’t reveal any more information at the moment and that Google is still considering different ways to provide the relevance of the autonomous car to the market.