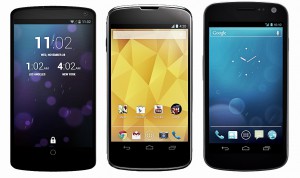 Google recently revealed the new Nexus 5 smartphone this Thursday. The release marks Google’s determination to make the competition more challenging for Apple’s iPhone, especially in some of the latest emerging markets.

The new Nexus 5 device features a 5-inch display and Google Now, which is the company’s own personal assistant technology. It has also has a strong integration of Google search and many of the company’s other tools that have come to the market. Nexus 5 was developed with LG and features a new camera that minimizes the hand movements known to cause blurring in images. The software used for the camera also assists users with taking better photos in difficult situations, such as fast-moving subjects or low light.

The device is available in white or black. It costs $349 for a 16GB unlocked version and $399 for 32 GB. That’s cheaper than most of Apple’s recent iPhones. In example, the iPhone 5c, which is considered to be the cheaper out of the two newest iPhones, costs $549 for a 16GB version that comes without a wireless contract. As a result, Google is marketing the Nexus 5 as cutting edge technology that’s available at an actually affordable price. This price difference is very important in developing markets that are continuing to grow at a faster rate.

One of Google’s major goals for the upcoming year is to get the Android mobile operating system into the hands of another billion users. Earlier this year, Google announced that it had achieved its one billionth Android activation. The company already leads based on the amount of units that have been shipped. However, a spokesman for the company has said that Google wants to get to a point where the number of people using Android and Google products is so large, developers would have no choice except to develop for Android first.