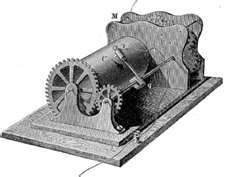 English Physicist Frederick Collier Bakewell is an inventor from the early 19th century who took the basic theoretical concept of the facsimile machine developed by Alexander Bain and created a working laboratory version for his tests.

Frederick Bakewell, born on 29 September 1800, died on 26 September 1869, from Wakefield in West Yorkshire was fascinated with physics and the practical means of using it.

Bakewell has spent a lot of time on the theories set by Alexander Bain, trying to make them into reality using complex systems of synchronized rotating cylinders and contemporary physic's knowledge. His form of “image telegraph” presented at the 1851 World's Fair in London was able to transmit a written piece of text across the distance, using two sets of cylinders and a stylus being dragged across the page. The insulating ink was used to generate on and off states for the receiver end of the image telegraph, and it was able to, despite problems, transmit simple line drawings along telegraph wires. The system was later improved by Giovanni Caselli, who developed a working pantelegraph. These facsimile machines were all used for commercial purposes before the invention of telephones.